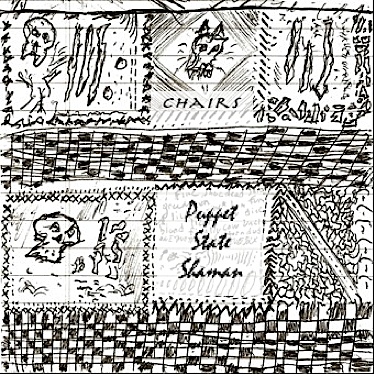 revised edition. review by disquiet.com
"Puppet State Shaman by Chairs, on the TVK netlabel, is border-state music. It’s Fourth World music, as sonic futurist Jon Hassell envisioned it. It is the sound of cultures rubbing up against each other and producing, as a result, these fractal associative patterns of chance aesthetic convergence and contrast. At times the music of Chairs, who are based in Houston, Texas, has the feel of a neighbor’s plaintive rituals heard through an inadvertently open window, of an old-world festivity restrained by the needs of privacy (by the challenges of assimilation), yet still seeping, relentlessly if patiently, into the world. At its best, as on “Weightlessness in the U.F.O. Corridor,” the music is downright otherworldly. The track is a midtempo mix of bowed string instruments, glottal vocalizing, dark-of-night animal calls, and chiming percussion. It is a ceremony performed not on its originally intended instrumentation, but on a hodgepodge of stand-ins collected at local pawn shops and tracked down in the aisles of Home Depot and Walmart." Ak'chamel (ex-Chairs) www.facebook.com/giverofillness

Uploaded by the vegetable kingdom on October 7, 2011